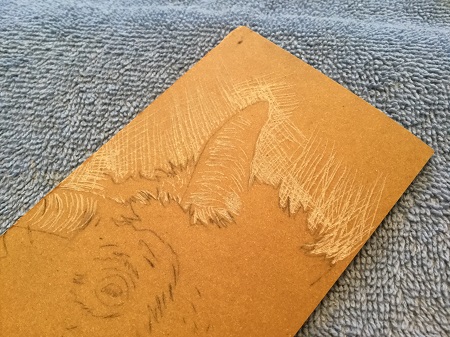 There is an upcoming print exchange that I’ve signed up for and the deadline approaches. What subject should I attempt? What method should I jump on? Last year I created a drypoint on copper and I wasn’t terribly happy with the end result. Do I try it again or do a traditional block print? It’s been several years since attempting the technique of drypoint on linoleum and my brain is already having issues with the final outcome. For those unfamiliar with drypoint, I’m basically scratching lines on my block (copper , lineolum, plexi). The scratches grab ink and hold on to it during the inking process. Once the plate is inked and wiped, you run it through a press with your dampened paper over the top. The paper is pressed down into the scratched plate and picks up the inky lines. So, I need to keep in mind the fact that it’s the scratches that create the darker values. The below test is the lino block on the left and the printed paper on the right. Whites are not really “white” but a light grey. I used a water based ink which won’t be my preference for the finished work. I prefer oil based even though it’s messy. The mini test indicates to me that I’m heading in the right direction. Hopefully I can make a few corrections (somehow) on the main block where mistakes have already taken place. 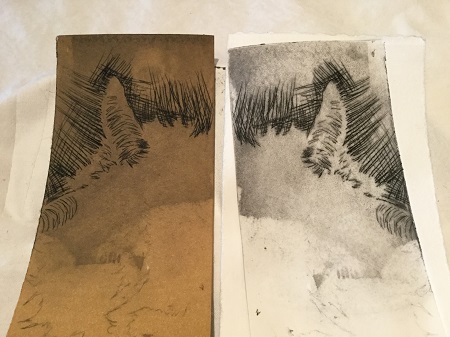 I’ll also start an eze-cut block to run in conjunction with this print. This technique works opposite. I’ll be removing the white zones and leaving black.  It will save additional stress on my tendons and finger joint issues. Which ever image comes out the best will be sent off for the exchange.

5 thoughts on “Reexamining a Technique”