Why is it when Dave leaves, the dog gets crazy? Currently, he’s off in India  jumping between Goa & Chennai for the next week.  There is one other place but I can’t recall where. Somewhere south of Chennai. I’m at home jumping through dog hoops, trying to keep the crazy boy out of trouble while attempting to do work. Ha! Like that seems to be working.

Today, we spent some time outside with the compost and looking for salamanders. I found two sallies yesterday while moving the blue tarp. No sallies today but discovered two snakes hiding… but only one would hang around for a photo.

Yesterday Moby discovered one I ran over with the lawn mower. He thought it was the best thing to roll on. Why do dog have to do that??? Blecho! 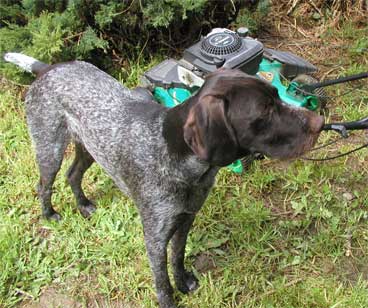 Ah the cute one. Just wish he would entertain himself by chewing on a bone or something! 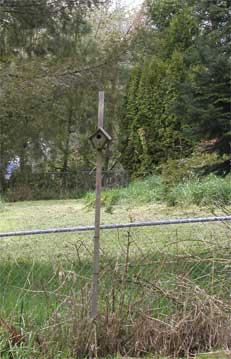 The little bird house  (not a good shot, but it’s there in the center of the photo) had some interested renters today, but I think they declined. A pair of chickadees spent time scoping out the house and surroundings. We’ve not had a single renter since it went on the market 5+years ago.  There have been two other houses in the yard and neither of them have had any interest. My dad created the bird houses and he feels like a failure since no one has taken up residence. Fortunately, the homes he’s built for humans have been well appreciated and lived in! 🙂

The oregano is growing well! The initial start came from a girlfriend who I worked with at Pirate’s Cove (a pet store long gone). She gave me the plant when moving to Montana over 18 years ago. It always makes me think of her.

A few tulips have come up this year with blooms. Last year we had a great crop so I wasn’t expecting much this year. I don’t spread bonemeal or extra supplements around. It would only encourage the dogs to dig up the flower beds.

Looking forward to starting a screen print tomorrow if the dog leaves me alone! 🙂