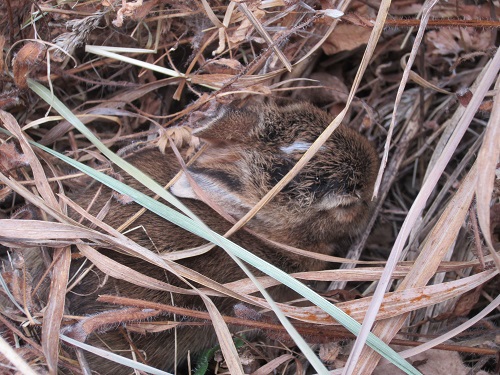 Can you see me?

This morning I went to check the new brood of baby bunnies. Every 6 weeks or so, we have new guys hopping around the yard. Certainly not a shortage of bunnies this year, in fact we have an overabundance. The nest location remained a mystery until Tuesday. That was the day I decided to reclaim the second half of our garden space from the blackberry brambles. Both dogs (we’re taking care of Ms Maggie right now) were in helping out and Moby discovered the nest. It was situated in the garden box where the soil was shifting away from the walls, covered with loads of grass. Unfortunately, he grabbed one and there was no way for me to save it. Urgh!  After that fiasco, I kicked both dogs out of the space and covered the remaining buns under the grass. Mom continues feeding the little guys because they were still there this morning, getting bigger, ears lifting more and eyes opening.  The above photo is of the larger, who happened to come out of the nest (and I had to shove it back inside). This is the second time I’ve had to handle them and (fingers crossed) momma bunny hasn’t cared. The little white blaze will disappear as an adult. These are the cottontail rabbits and can weigh up to 54 ounces when fully grown. Our cat brought in a juvenile that weighed close to 2.5 lb. I suspect our adults weigh close to 3 pounds.

A little more progress has been made, but not much, on the cell cutting. It takes forever to get rows cut. So far my fingers are holding up, but I’m not pushing things hard. That’s part of the reason it’s going so slowly. I’ll get through another couple of rows today before heading to the coast. They say we’ll be having rain, but I’m still doubtful. Fortunately, the weather has cooled quite a bit. It’s nice to be back in the mid 80’s again.