Fish have distinct body parts that are captured with printmaking. Scales, eye, mouth, fins, tail and operculum (gill cover). The nice thing about taking a copy of the original is the ability to add and subtract from the image, increasing the fishy character. Below is the starting copy before adding lots of additional stippling with a micron pen. 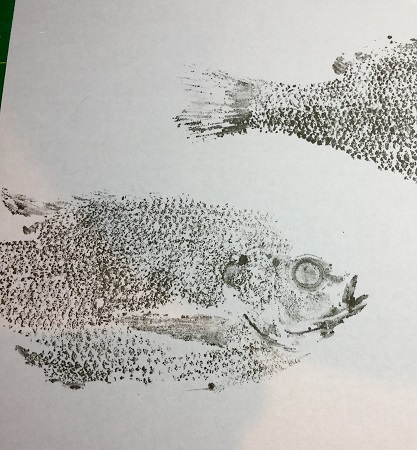 Now with the changes. I added a bit more definition to the lower fish’s eye, mouth, fins, dorsal ridge, and a few other places. The upper tail received a bit more umph. I don’t want to get terribly crazy with additions. There’s a nice quality to the original image. 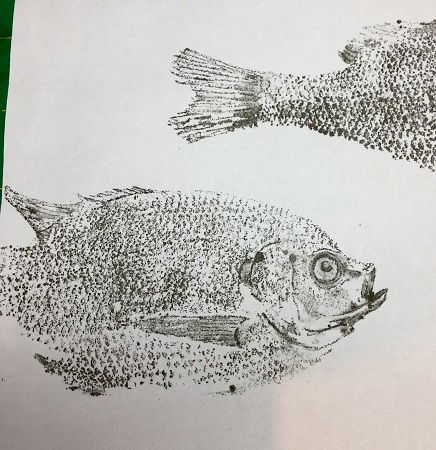 I’ll be continuing to shift and alter the copy until it feels done. Then more copies will be created so the lithography process can begin. With 8 clay forms waiting, there should be plenty of practice to be had. It’s still uncertain how this image will actually work via the method. The video I watched talked about achieving good value changes, but I won’t know until after firing.

I can already think of one or two family members who might like to have an additional fishy artwork added to their home. (That would be Tim and Cecil, but don’t spoil the surprise!) It’s doubtful that they actually catch and eat Bluegill, but ya never know. If this process works, I might have a new product line for Philomath Open Studio Tour, but I’m not holding my breath.