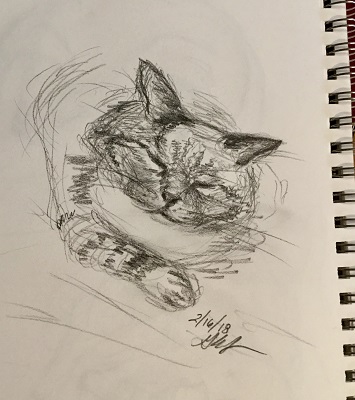 We are still waiting for winter in Oregon. Yes, it’s mid February, but somehow we’ve missed out on all the powerful storms and snowfall. With the lack of winter comes an early flea/tic season. The dogs received oral flea medication back on Monday after discovering a multitude of “friends” on Hazel. Today I pinched a flea off the grumpy one before she could bite me. Now she too has been treated.

Me Me has been particularly grumpy of late. Last Friday I received a huge bite to my face drawing blood and a good open wound. Giving the cat physical attention has subsequently shifted. For some reason I don’t want her to roost on my shoulder and cuddle against my neck. She’s not a fan of the change. She’s also living among the current remodel site. Drywall dust and chunks are everywhere, open ceiling space, exposed floor joists. It would be nice to get things tackled this weekend and close up the space.  Maybe after the ORT in Brownsville (Odor Recognition Trial). Moby has one scent he missed last year. I participate in a dog sport called Nosework to make life more interesting for both of our pups. Fingers crossed that he will be calm enough to handle the situation. I feel lucky to know the site and a bunch of the volunteers involved.

Off to get some work done!

Have a great weekend everyone!