Saturday morning I dashed off to Harry & Carol’s farm to take in the shearing process. Carol had let me know on Friday afternoon via email that the shearer was coming. Of course, I didn’t read emails that afternoon/evening and discovered the news on Saturday morning.

Thirteen ewes need a haircut. Vince, who trained in New Zealand as a shearer, was called in for the job. I’ve seen plenty of movies with sheep farm scenes, hefting the ewes into position and shearing quickly and efficiently. One interesting fact learned was sheep can die in this process. It has to do with their stomachs pushing upwards into their lungs when moved around on their backs. Good shearers recognize real distress signs and will push the ewes back to their feet. Good farmers bring the sheep in off the fields 24 hours prior to shearing (no food or water allowed). This allows their stomachs to empty and are less apt to crowd/crush the lungs. It kind of makes me think of fasting people/pets prior to surgery, but sheep have a much more extensive digestive system.

The ewes were all  fat, even with having lambs nursing. They averaged around 150lbs. Vince was an amazing shearer. He does small farms and will team up other shearers and work the big commercial flocks out on the grass seed fields. It keeps him busy for many months all over the state. I’m impressed at his body’s ability to heft the woolly gals into position and keep it up, sheep after sheep. I watched from the sidelines and grabbed the fleece I wanted. Some of sheep had much denser coats and I started recognizing which might yield longer strands of hair.

I’m teaming up with my sister and a friend of hers to process, spin and dye the wool. My best friend is bringing out her mothers spinning wheel from Louisiana next week. Everything is falling into place for the next step in the experience. 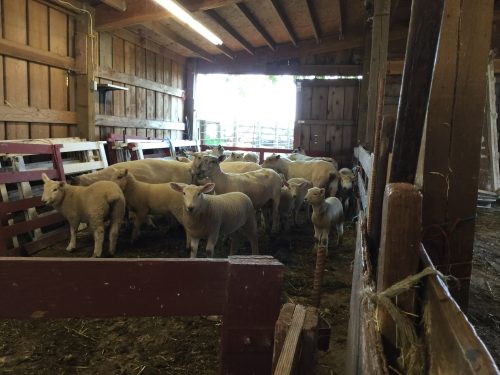 Ewes and lambs almost ready to head back to pasture. Everyone made it through the process and received health checks too. 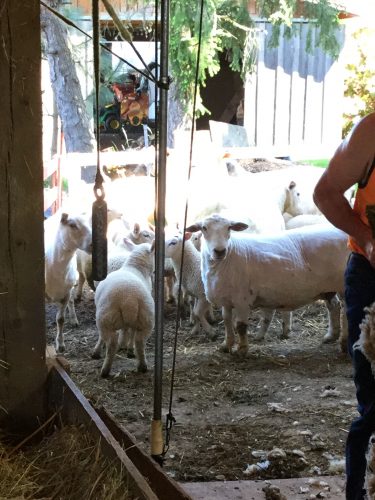