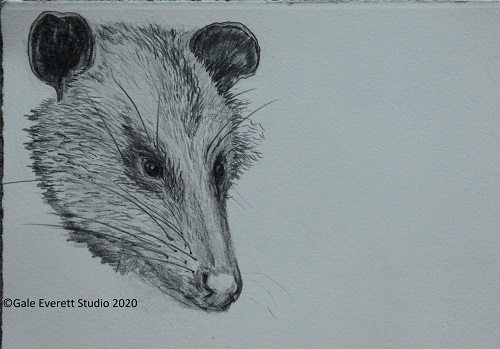 Last week we had an incident in the backyard. They happen on pretty regular occasion: the dogs scent some creature, there’s a big chase around the giant juniper bushes with the dogs climbing in as deep as they can. Barking, massive thundering pounding footsteps as they race around the bushes. It often occurs late, and I mean LATE, like 2 or 3am. Last Thursday it happened earlier at 10:30pm. Sometimes I have to go out and try to grab the dogs which often isn’t possible. Their focus is on the hunt, not me. A few times I’ve had to pull out the hose and spray them to break their crazy focus. Thursday night Dave actually had the chance to participate in the frackus. I went out and shone a headlamp down into the place the creature was cornered and I thought I saw a possum tail. It wasn’t the easiest to figure out since Moby had the sizable creature in his mouth and was attempting to shake the daylights out of it. I was really concerned the creature was a neighborhood cat. (no, we’ve never had the dogs kill a cat but I wouldn’t put it past their capability) Moby eventually thought the creature was dead and extracted himself from the snug location. The creature was motionless. Was it dead? I couldn’t tell and wasn’t about to dive into cutting back the bushes. We gathered up the dogs and took them inside for a serious wound cleaning. Moby proceeded to vomit all over the bathroom floor and Dave kindly cleaned it up. I worked Hazel over and found a few nicks on her face. We eventually made it to bed around 2am.

The cats proceeded to wake me up at 6am for their morning feeding and I was already contemplating the chore of going out to extract the dead animal. Around 10am, I pulled on some shoes and the headlamp to check the situation. The “dead” animal was gone. Whew!!!

The possum actually played possum to get Moby to drop the body. I’m always in awe of these strange creatures and enjoy seeing them running around the far backyard triggering the game cameras. We were thrilled it managed to survive. Moby felt that he did his job and killed the intruder.

It will happen again…

2 thoughts on “Dogs vs Opossum”