Tuesday was an enjoyable day. No specific appointments, just a simple drive to Eugene to pick up mail and visit my sister. However, I took extra time to explore Halsey and the building for the Art in Rural Storefronts project. Initially I stopped off at the recently remodeled train station that holds City Hall, a community meeting space, and the small city museum. I didn’t take the time to investigate things inside but had a nice time looking at their mural. Saving a little something special for another day. 🙂 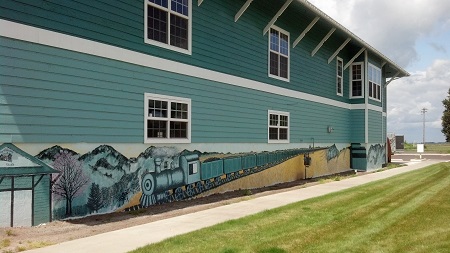 I drove through the residential area then cut over to the industrial zone along the train tracks. Low and behold, I found the building.

In one of it’s former lives, it was the public library(1929). More recently it’s been home to their city hall. Did it have an even earlier life before 1929?

The building is not on the main traveled road and faces the blank wall of a warehouse.  It seems like the only traffic would be for the DFL seed company one block south. There is a building in use  north a bit, but really this street section feels pretty empty of life. This makes me a tad concerned. I’m also a bit concerned about the narrow divided windows. Where will the Arts Center place their information? Will there be any sort of signage off the main road? How will people even know about this project as they travel through town?  This will be much more challenging than I originally envisioned. What was I envisioning? Big plate glass windows on a main road. Oh well. I’ll just have to work harder to make it a spectacular space to come visit. 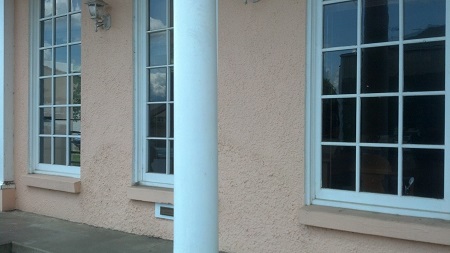 Looking in through the front door at the windows.  The interior is carpeted and the windows don’t extend down as far as I had originally thought (which is probably a good thing). Once the desk, chairs and boxes are moved to the other side of the room, there will be plenty of space to work in.

Looking north on 1st Street at the blue telecom building.  There are a couple of kids at a home (lighter blue) just past that playing on the sidewalk. Ok, there is some street life! 🙂 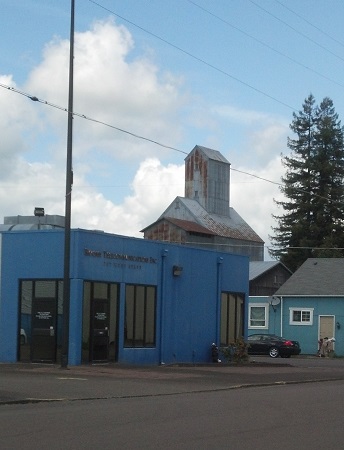 The deconstructed building is right on the train track line. I suspect it was a granary. I’ve been watching the dismantling over the past many years. It’s east and north  of the project building. 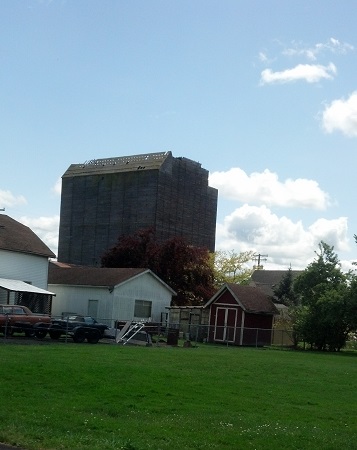 A view looking east but not from Halsey. This was a bit south off Peoria Rd. I took a side trip to see Irish Bend on the Willamette River. 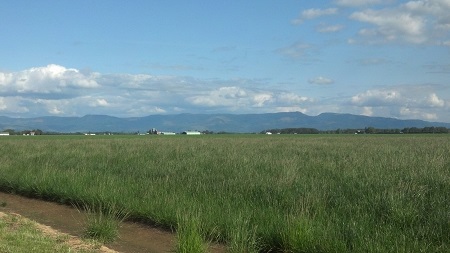